Custom Search
Best Dive Movies
Best Dive Photos
Best Dive Sites
Free Subscribe
, if you would like to give Greatest Dive Sites permission, only by request, to upload dive items to your FaceBook account and visa versa.

Situated at a very steep angle, the Aida is a popular wreck while diving Big Brother, Red Sea.

The Aida (SS Aida), often mis-named as Aida II, is a deep 75 meter long upright wreck at the northwest side of Big Brother. Very well covered in vibrant and colorful soft and hard corals, it is a dive too deep for novice divers and even advanced divers can only take a look at the shallower bow. Sponges, anemones and the ever present groupers are sights to behold. Nitrox divers, technical divers and those willing to enter the wreck should take great care as the Aida is laying at a very steep angle and dangerous at this depth besides. Most wooden parts have long rotten away, but its steel framework has been left intact for us divers to explore. Sights to take a look at include the half open engine rooms and holds in 35 meter of water, the many sweepers that inhabit the holds and the largely intact forward mast.

The Aida, built in France, was launched in 1911 and used by the Egyptians in their ports and for their lighthouse administration. Later, she was transformed into a military troop transport vessel. Records say that the Aida is one of the ships being repaired by the Allied forces in WWII until it floated again and could be used against the Germans. On a rough day in September 1957, the Aida (then bringing supplies to the coastguard and lighthouse staff residing on the island) was hit by rocks on Big Brother's western side. All crew and passengers were brought in safety by a tugboat called Bergehus, while the Aida drifted northward to eventually sink near a reef in deep waters. Although deep, it is a great sight to see a wreck in such state and coral coverage. 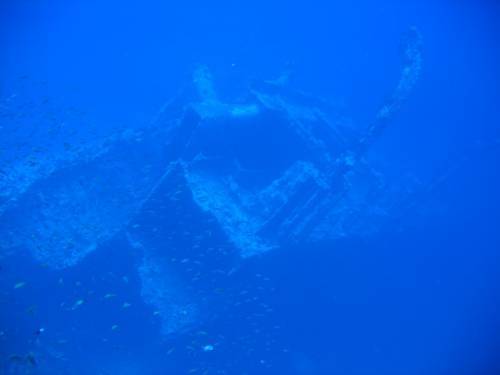 Take a look at all the pictures!

Take a look at some of the other dive destinations.